Mention ‘Pembrokeshire’ and it’ll likely conjure up images of soaring cliffs interrupted by long expanses of golden sand. In fact, its coastline is considered so special it’s still the only coastal national park in the UK. But the prehistoric landscapes of North Pembrokeshire, and the ancient myths and legends associated with them, have earned it the description as the ‘Land of Magic and Enchantment’. So, this experience is going to take you inland and up-hill. 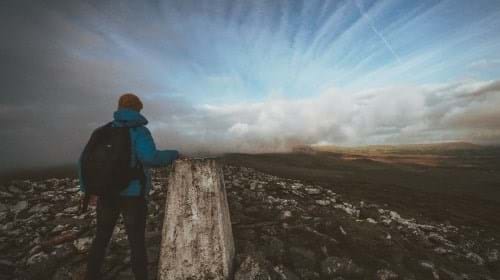 Nowhere is the magic and enchantment of this part of Pembrokeshire more evident than the Preseli Hills, the fabled source of the Bluestones that make up the inner ring of Stonehenge. Dotted across the wild moorland, heath and grassland are prehistoric remains, burial cairns and hill forts.

Situated on a stark hill is Foel Drygarn, , meaning ‘Bare Hill of the Three Cairns’. The three burial cairns at the summit date from the Bronze Age, with the hill fort – the largest in Pembrokeshire – added during the Iron Age. We think that the 360° views from the summit, as far as the Irish Sea on a clear day, definitely make the climb worth the effort.

In the foothills of the Preselis, the cromlech (megalithic tomb) of Pentre Ifan has stood for 5,000 years, framing the Carn Ingli mountain and overlooking the sweep of Newport Bay. Constructed from the same Bluestones as its ‘big brother’ at Stonehenge, it creates the same sense of mystery about what its true purpose was. To feel a real sense of connection with our Celtic ancestors, stand here at dusk as the sun sets over the bay, just as they would have done - and wait for the hairs to rise on the back of your neck. 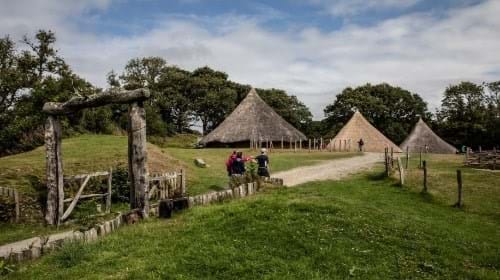 Wherever humans live, we carve our stories into the landscape and the Celtic people of North Pembrokeshire were no different, leaving behind 8 prehistoric sites for you to explore. Castell Henllys (or ‘Castle of the Prince’s Court’ in English) is about as close to a living, breathing Iron Age village as you’ll find in the UK. Its roundhouses were reconstructed using the original postholes, unearthed by archaeologists during excavation. The history of the hill fort is retold by costumed guides, who represent members of the Demetae tribe that once lived in these parts. And if the idea of walking in the footsteps of warriors appeals, you can do so – quite literally – by taking the sensory barefoot trail. The trail features 8 different surfaces to feel under your feet; including flint gravel, squelching clay and tree stumps.

A short journey to the pretty little village of Nevern will lead you to the churchyard of St Brynach, and to the 10th-century Nevern Cross, often described as one of the most perfect examples of a Celtic cross in Britain. You’ll also see two 5th-century ogham stones inside the church. Wales has the largest number of ogham stones outside of Ireland and about half of these can be found in Pembrokeshire, where many Irish settlements were established. St Brynach himself was born in Ireland.

As we already mentioned, there are 8 ancient sites in this area so, why not continue your journey around prehistoric Pembrokeshire for even more tales of how the ancient Celts connected with the land?